The Bediani Children’s Center (BCC) is a non-profit, non-governmental organization located in Bediani in the Tsalka Municipality in the Kvetmo-Kartli Region nestled in the heart of Georgia.  Because of the high elevation and rough terrain, this region is one of the most economically depressed in the country.  Bediani is better off than the majority of the region which is displayed in their flush toilets, access to medical care, tourist attractions, and sources of income other than farming for the majority of the villagers.  No matter where you are in the village, you are surrounded by towering mountains covered in greenery.  There is a small river that flows through the center of the village where villagers recreate and draw water for daily use.  Just upstream, there is a hydroelectric power dam that provides electricity for the area.  Between the village’s children’s center, the large psychiatric hospital, and tourism brought by the historic 11th century convent, here are enough jobs and resources for the village’s about 150 inhabitants.

My friends and family were alarmed when I first told them I was staying at an orphanage.  I didn’t know what to expect until I arrived.  The Bediani Children’s Center is one of only four in Georgia.  These are relics of Soviet occupation; when the Soviet Union occupied Georgia, children were turned out on the streets because their parents were either killed or exiled to Siberia because they opposed the Soviet Union, or abandoned by their parents because they were not given enough resources to care for them.  The solution was children’s centers: a place where orphaned children would live 5-6 per household with a family or an adult to care for them.  In exchange, the caregivers, called “teachers”, would receive a small stipend from the government.  The system is still in place but need is reduced so few children’s centers are still functioning today.  The centers still function in a similar fashion to California’s foster care system where children who still have families but no guardians who can care for them can be accepted to the centers.

Because of the decreasing demand for children’s centers, BCC has used their resources to fundraise for extra capital and sponsor events to enrich their community.  The main building has been transformed into a training space.  I was housed in the Bediani Regional Education Center (BREC), a large building that serves as a training and lodging center for the Bediani Children’s Center (BCC).  The building has three levels.  The first floor has two bedrooms, living space, and a kitchen that is inhabited by two of the children and one teacher during the school year.  This is where myself and other long-term guests stay in the summer.  The upper two floors have spacious, recently renovated rooms that can be transformed into meeting rooms or outfitted with bunk beds for conferences and camps.

The Bediani Children’s Center is an anomaly.  Few places in Georgia were able to convert abandoned Soviet initiatives following the collapse of the Soviet Union.  Many of the buildings and businesses created by the Soviet Union have either been repurposed or remain abandoned.  This happened because of massive migrations to the city due to lack of jobs.

Tbilisi, the largest city in the country is comprised of vastly differing architecture.  Driving through the city, visitors are met with strange juxtaposition of ancient ruins, soviet towers, and modern designs.  This city is bustling with life, looking out of my project client’s Tbilisi apartment I can see cars moving up and down the paved and cobble streets and people walking, laughing, and speaking with one another.  Yet despite the movement and economic growth, there is no shortage of empty and poorly maintained apartment buildings. 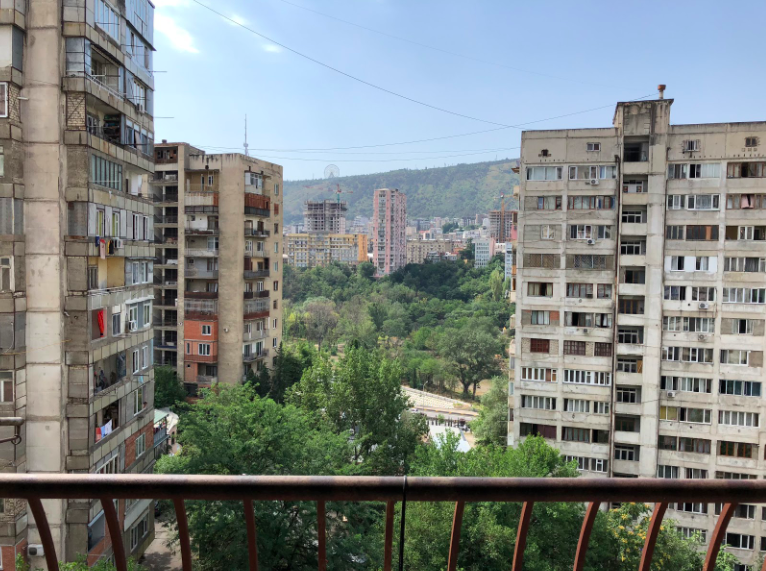 The area of Bediani where BREC is located is fully inhabited with families and children from the Children’s Center occupying each of the ten properties belonging to the center.  The city is divided into two parts: the upper section where BCC and an 11th century monastery are situated and the lower section where the main part of the village is and the majority of the village’s 160 inhabitants. A few days after my arrival, some of my hosts took me on a tour of the village.  As we walked from BREC to the main part of Bediani, they explained what each of the buildings was for: a bakery, governmental offices, a marketplace, a wedding and celebration hall, a blacksmith, an auto shop mechanic.  All essential parts to keep remote village functioning and thriving.  There was only one problem: they were all abandoned.  Accompanying the abandoned businesses were uninhabited apartment buildings and houses.

This is not an uncommon phenomenon, we drove through villages that followed a similar trend: abandoned houses and businesses.  It felt like we were passing through ghost towns.  Now the Georgian reality is one of a country that was stolen from them, micro managed, then returned to them in dishevelment.  This is their reality: constantly battling with relics of the past.

The Capacity to Learn (Georgia)